Keyloggers are also known as Keystroke loggers, are type of software or Hardware that basically designed to track and record the keys struck on a keyboard in a covert manner so the user whose using that keyboard is unaware that his/her actions being monitored.

There are mainly two reasons behind using Keyloggers:

The most likely Keyloggers being used is by hackers whom they find very useful to gather user interactions and personal information from local or remote computers.

How do Keyloggers work?

The keyloggers basically record every single keys struck a user is performing while using his/her computer, and also may capture snapshots from the whole screen from time to time as per the configurations set by the hacker before or after the injection of an infected file or after the installation of the keyloggers software onto your Windows.

They may also form as Hardware as a small piece of a connecter that attached between the keyboard’s terminal and the computer as shown in the below image. 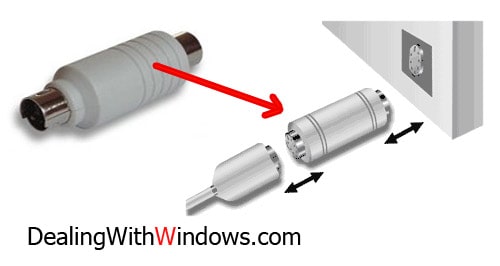 When someone uses the keyboard of his computer, the keylogger starts recording every single keystroke he/she presses,  and saves all the records in a log file, this log file will be sent to the hacker’s email (as configured by the hacker) along with screen snapshots in case if it was configured as well.

How to be safe from Keyloggers?

You may try to follow the below three advices to secure yourselves from being victims of keyloggers:

Note: OSK can be found in any Microsoft Windows simply by following the below:

Click on Start menu > Type osk in the Start Search > Then hit Enter.

How to know if my computer infected by keyloggers?

Having an updated antivirus is not enough to protect your computer from keyloggers, many of the keyloggers are not recognized by antivirus programs as harmful software because under some circumstances keyloggers can be considered a legitimate piece of software, so it’s better to have dedicated Anti keyloggers software installed and updated alternatively with the antivirus, and to understand how Anti keyloggers work, typically they compare all files in your computer against a database of keyloggers looking for similarities which might signal the presence of a hidden keylogger.

Now, the best Anti Keylogger that you may find over the internet is called Zemana AntiLogger.

This is me Firas Sameer the founder of Dealing With Windows, I am a computer and telecommunication engineer with over 14 years of experience, I love helping people and I love spending some of my free time posting useful articles for free about Microsoft windows.

After upgrading to Microsoft Windows 10 a certain common issue raised for many Microsoft Outlook users and for different versions of Outlook where Outlook is not able to send emails while it can...

Continue Reading
link to What is the internet? For beginners

This is me Firas Sameer the founder of Dealing With Windows, I am a computer and telecommunication engineer with over 14 years of experience, I love helping people and I love spending some of my free time posting useful articles for free about Microsoft windows.